PESCIA Pescia is a medieval town, in which the separation of secular and religious buildings particularly catches the eye. Pescia is rich in art treasures and has a significant history. For a long time it was the subject of the dispute between Florence and Lucca because of its privileged position.
Distance: 4 kilometers from Agriturismo great view of the city 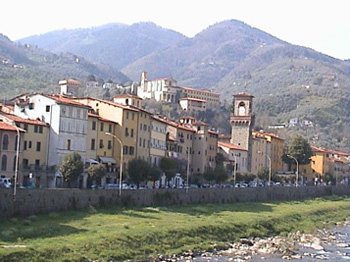 GIPSOTECA "LIBERO ANDREOTTI": Housed in medieval Palagio Palace is a permanent exhibition of the Gipswerke Libero Andreotti (1875-1933), a famous pescian artist. The contribution of Andreotti to sculpture before the 20th Century is widely acknowledged and this collection of 230 pieces makes a great opportunity to sense his works with his own hands.
Admission free. Phone 0572/490057. 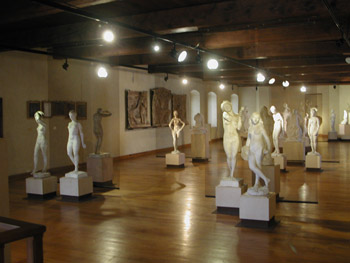 CHIESA DELLA MADONNA DI PIE´ DI PIAZZA: This small church surprises the visitors with its wealth of art works. The facade, with its straight lines and balance houses a majestic heart with a wooden ceiling from 1609 and the enchanting fresco "Madonna with Child".
Admission free. 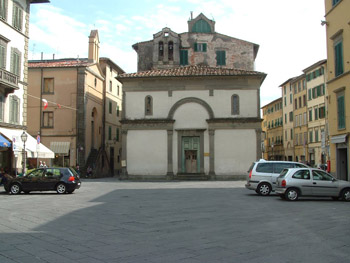 TAVOLA DI BONAVENTURA BERLINGHIERI: In the church of San Francesco is this valuable work of the artist Berlinghieri from Lucca of 1235. The oil painting on canvas "San Francesco and stories from his life" with a frame from the 15th century was brought back to light at the end of the 19th century by Michele Ridolfi.
Admission free. 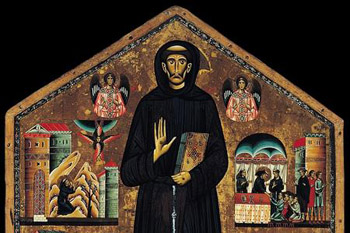 PINACOTECA DI SAN MICHELE: In the old monastery of San Michele Arcangelo is an art gallery with the rediscovered paintings from the 14th century.
Free admission. Visit only possible after prior announcement by calling 0572/476307. 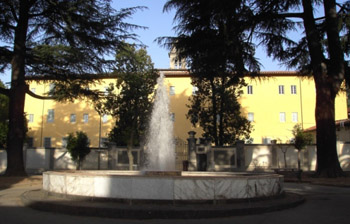 MUSEO DELLA CARTA: In Pietrabuona, one of the ten villages, there are still some active paper workshops. In addition, a historical tour on the subject "paper and its production" is offered. The museum boasts a collection of watermarks including that with the portrait of Napoleon and Maria Luisa of Austria, which was rediscovered in 1812. The plant is therefore popular with students, but also for families and pupils.
Phone 0572/408020 or www.museodellacarta.org. 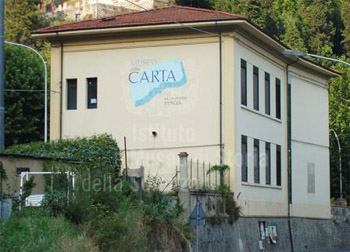 PARCO DI PINOCCHIO: The Pinocchio Park could only arise in Collodi where the old village still looks like it did a hundred years ago, with the typical houses that stretch out like a waterfall from the hill behind the villa Garzoni and the theatrical garden from the 18th Century. Here the mother of Carlo Lorenzini was born, here the writer spent his childhood at times with his grandparents, here you will understand why the brilliant journalist and writer took the pseudonym Collodi. The fantasy world of Adventures of Pinocchio springs from this place, and thereby obtains the expressiveness that has made it a timeless and boundless masterpiece of Italian literature. Distance to Collodi: 5 kilometers. Phone 0572/429342 or www.pinocchio.it. 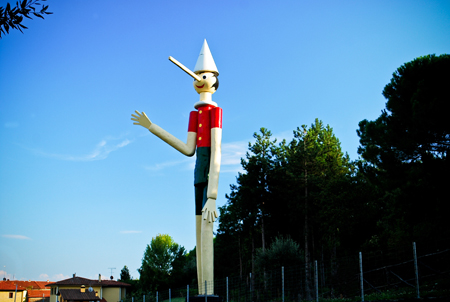 GIARDINO GARZONI-BUTTERFLY HOUSE: The 17th century classic Italian garden is part of a villa, which unfortunately can not be visited. The natural, hilly terrain was subtly balanced. This created spectacular water features and ponds, statue-lined paths, a maze and many other magical trinkets. In this garden are the Butterfly House, a greenhouse, in which rare tropical plants and animals live in perfect harmony.Combined ticket for the Parco di Pinocchio and Giardino by telephone 0572/427314 or www.pinocchio.it. 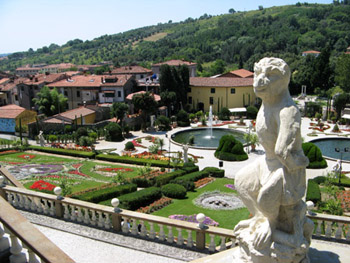 COLLODI CASTELLO: The medieval village is dominated by a villa and from here you first climb up the hill to a castle, which has always evoked curiosity and admiration. The village does not offer any other attractions or shops, but the incredible beauty of a place which has remained faithful to itself over the centuries is worth a visit. The San Bartolomeo church on the summit of the hill is noteworthy because of the woodwork, the richly frescoed ceiling and the bell tower, which formerly served as a lookout.
Distance: 5 kilometers 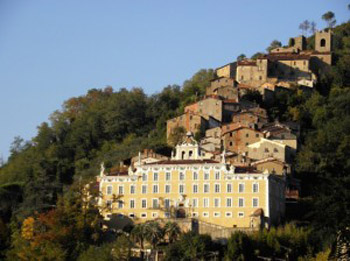 MONTECARLO: Monte Carlo is an Italian community with nearly 5,000 inhabitants. The old town of Monte Carlo is located on a single hill in the plain of Lucca. Monte Carlo was founded in 1333 by the later Emperor Charles IV and named after him. It was built as a replacement for the site, which had been destroyed by the Florentines. Monte Carlo remained in the hands of Lucca until it was conquered in 1437 by Florence, to which it belonged until the unification of Italy. Area attractions include the fortress completed in 1555 by Cosimo I de´Medici, the church of S. Andrea from 1700 and the chapel of St. Anna. Monte Carlo also has the Teatro dei Rassicurati from the beginning of the 18th century. Monte Carlo is a wine region with DOC seal.
Distance: 8 kilometers 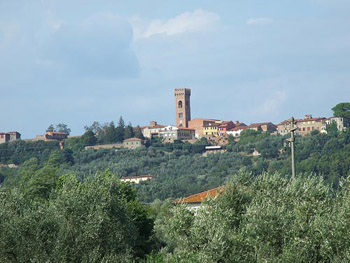 LUCCA The Lucca province extends north to the Garfagnana, in the east along the Versilia coast and on the west by the province of Pistoia. Today, this province boasts of producing the best olive oil of Tuscany.
More information at: www.comune.lucca/turismo.it www.fondazioneragghianti.it www.luccamuseinazionali.it www.lemuradilucca.it www.puccinimuseum.org www.luccamuseum.com
Distance: 20 kilometers by car, about 30 minutes. 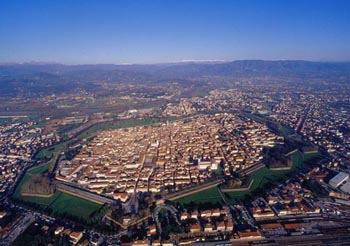 VILLE LUCCHESI: The thriving landscape is littered with villas that were once used by wealthy urbanites as a summer residence. These luxury residences are themselves of a stunningly opulent architecture and home to true works of art and wonderful gardens.
At www.villeepalazzilucchesi.it you can check all information and possible tours.
All villas are within 10 kilometers around Lucca. 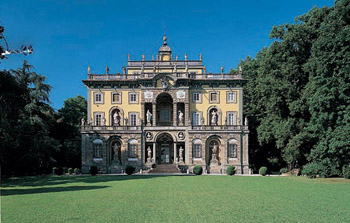 FIRENZE Florence (Italian Firenze ) is a Tuscan city with almost 370,000 inhabitants. In the metropolitan area there are 1.5 million people. Florence is the capital and largest city of Tuscany and of the Florence province. Florence is famous for its history.
More information at: www.firenzeturismo.it www.duomofirenze.it www.polomuseale.firenze.it
Distance: 65 kilometers by car, about 50 minutes. From Pescia station approximately 1 hour by train. 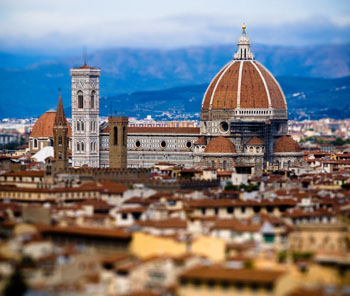 VIAREGGIO: Viareggio is the oldest, largest and most famous coastal resort in Versilia, a world-renowned tourist destination. Viareggio is also the center of pleasure, of Carnival and the elite night life with its renowned clubs and premises.
Distance: 50 km by car, about 50 minutes. From Pescia station about 50 minutes by train. 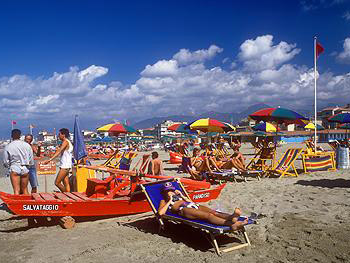